Originally, the area at Genslerstrasse 66, which would later be used as the remand prison, housed a large canteen for the National Socialist People’s Welfare Organisation (NSV). The construction of this red-brick building was completed in 1939. In May 1945, the building was taken over by the Soviet occupying forces and converted into a prison camp known as "Special Camp No.3."

This detainment and transit camp was under the direct control of the Moscow People’s Commissariat for Internal Affairs (NKVD). From here, over 20,000 prisoners were either transported or forced to march to other Soviet camps including, for example, the former Nazi concentration camp at Sachsenhausen. Show more

The living conditions in the camp were catastrophic. At times, there were more than 4,200 people crammed together in a relatively small space. The food rations and medical resources were completely inadequate, the hygienic conditions appalling. Winter imposed an additional burden on the prisoners, with the cold so intense in the unheated cells that many became severely ill. About 1,000 people died under these conditions. The bodies were disposed of in bomb craters that were being used as landfills in the vicinity of the camp.

Most prisoners had been sentenced under the Soviet directive 00315, issued on April 18, 1945. This directive allowed the authorities to arrest and imprison spies, saboteurs, terrorists, Nazi party activists, members of the police and secret service, government officials, and other "hostile elements" in Germany. Later, the Soviets justified the wave of imprisonments by citing the August 1945 Allies agreement to find influential Nazi sympathisers and arrest ex-Nazi officials in high administrative posts. However, many people the Soviets arrested had been only marginally involved in the Nazi regime, if at all. Hence, the detainees not only included numerous non-ethnic Germans (above all, exiled Russians) but also women and adolescents. Frequently, imprisonment was due to denunciation as was the case for the renowned German actor Heinrich George, incarcerated here before being transferred to Sachsenhausen where he died shortly thereafter. However, critics of Soviet occupation were also imprisoned at Hohenschönhausen, as was, for instance, Karl Heinrich, SPD party member and commander of the Berlin Police force, who died in the camp in late 1945. In November 1946, Special Camp No. 3 was finally closed, not least because of the growing concern voiced by the local population. The prisoners were subsequently relocated to other camps.

The Soviets set up a total of ten Special Camps in Germany, establishing Genslerstrasse as the headquarters for their administration. The official but incomplete records listed 122,000 Germans as detainees in these camps, more than a third of whom died whilst imprisoned. The majority of those imprisoned were held for years without ever appearing before a court. From 1947 onwards, increasing numbers of inmates were sentenced by Soviet Military Tribunals (SMT). For example, in the former Special Camp, more than 12,000 German civilians were incarcerated in this way, with many of them accused of what were termed counter-revolutionary crimes. The last three camps, including the former Nazi concentration camp at Buchenwald, were closed as recently as 1950 along with the Hohenschönhausen administrative headquarters. 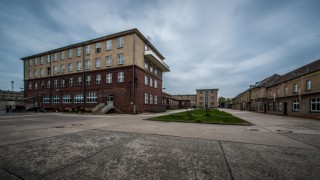 Red-brick building of a large canteen, used as a special camp since summer 1945
© Thomas Weber - webrock-foto.de 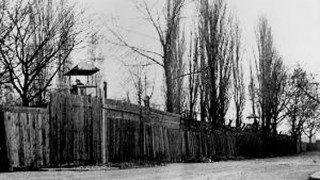 Wooden fence of the Soviet special camp, photo taken in the mid-fifties
© Bundesarchiv