In winter 1946/47, the Soviet authorities converted the former Special Camp No. 3 into the main Soviet Secret Police prison for detention and interrogation in Germany. Prison labourers carried out the conversion of the former canteen and food store, including the construction of the underground cell section that prisoners dubbed the “U-Boot” (“the submarine”). Show more

The small cells were damp and cold, furnished with only a wooden bed and bucket as a toilet. The light in the cells was kept on both day and night. Generally, interrogations took place at night and were often accompanied by threats and physical violence. Later, former prisoners reported that confessions had been extracted after sleep deprivation, standing for hours on end, being kept under close arrest, or being confined in water cells.

Apart from people suspected of having been part of the National Socialist apparatus, those imprisoned were primarily thought to be potential political opponents: members of the democratic political parties such as the socialist SPD, the Christian democratic CDU, and the liberal LPDP. However, the prison also contained numerous communists and Soviet officers accused of being disloyal to the party. Later, Soviet military tribunals sentenced the vast majority of prisoners to long periods of forced labour. After the SED Party dictatorship collapsed, former prisoners were permitted to apply for rehabilitation. Nearly all applicants to reopen their cases were found innocent by the Russian Military Director of Public Prosecutions. 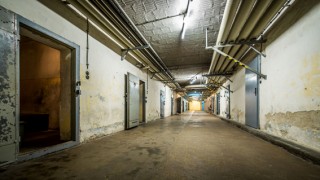 The "submarine" in the former Soviet remand prison 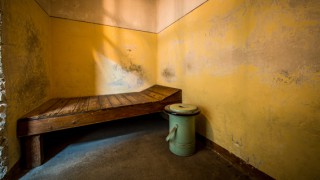 Cell with wooden bed and a bucket as the toilet
© Thomas Weber - webrock-foto.de