The Ministry of State Security (MfS) remand prison in Berlin-Hohenschönhausen was located in a large, restricted military area, open only to authorized personnel. For those outside, all that was visible of the restricted area were the closed metal gates, watchtowers, surveillance cameras, and armed security personnel. The latter belonged to the Ministry of State Security (MfS) guard regiment that monitored the entire area, including parts of the Genslerstrasse, Freienwalder, and Lichtenauer Strasse stations. The restricted area never appeared on GDR street maps but rather was simply left blank. Show more

The Soviet Secret Service initially established a restricted area as early as 1945. It appropriated a large part of the surrounding industrial zone, including the long-standing site of the Richard Heike meat-processing plant, which was demolished. The area was then fenced in, creating one of the largest Soviet restricted zones in the former German capital, second only to the "Soviet military zone" in Berlin’s Karlshorst district. Before 1946, the sectioned-off area in Berlin-Hohenschönhausen contained "Special Camp No. 3," a Soviet detainment and transit camp, which was converted into a Soviet prison and labour camp in use up until 1948/49. The Soviet Ministry of Internal Affairs' Special Camp Department was located in the restricted area. In addition, the Soviet State Security Central Investigation Department was housed here from 1947 to 1951, using the cellar of this former canteen and food store as its main remand prison.

The GDR State Security Services took over the restricted area in 1951. Apart from the main remand prison, labour camp "X," and the two departments responsible for instituting criminal proceedings, the area was also used by a number of departments under the control of the Ministry of State Security (MfS):

Map of the restricted area, in black the former Stasi prison
© BStU 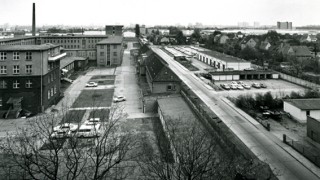 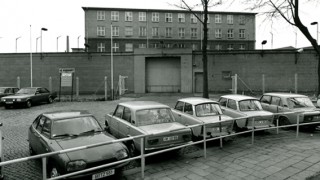