In 1951, after its founding, the East German Ministry of State Security (MfS) established the Soviet cellar prison at Berlin-Hohenschönhausen as its central remand prison. In the 1950s, upwards of 11,000 people regarded as obstructive to the communist dictatorship were incarcerated here. Show more

The list of those arrested range from the leaders of the June 17th uprising in 1953 to Jehovah’s Witnesses. Still, many others also spent months in the tomb-like cells, from reformist communists such as Walter Janka, head of the Aufbau publishing house, to politicians who had fallen from grace, such as former GDR Foreign Minister Georg Dertinger, a CDU party member, and even one disgraced ex-SED Politbüro member, Paul Merker. Moreover, during this period – long before the Berlin Wall, – the Ministry of State Security (MfS) kidnapped critics of the SED Party who were in the West and brought them to the Hohenschönhausen prison. The most famous case, perhaps, is that of Walter Linse, a West Berlin lawyer, kidnapped near his home in 1952 and executed a year later in Moscow.

At the end of the 1950s, the prisoners of the neighbouring labour camp "X,” which was located at the back of the site, were forced to build a new prison building with over 200 cells and interrogation rooms. Until 1989, this U-shaped building served the Ministry of State Security (MfS) as their main remand prison. After the Berlin Wall went up on August 13th, 1961, the prisoners here were held primarily after applying to leave the GDR or attempting to escape. However, the prison continued to house SED Party critics, such as dissident Rudolf Bahro, writer Jürgen Fuchs, and civil rights campaigner Bärbel Bohley. This building was designed to hold around 200 prisoners. The Ministry of State Security (MfS) had an additional remand prison at its headquarters in Berlin-Lichtenberg as well as one in each of the GDR’s 15 local authority districts.

Over the years, physical violence, commonly used in the 1950s to wear down prisoners’ resistance, gradually gave way to sophisticated psychological interrogation methods. Prisoners were never told where they were being held and were given the feeling of being at the total mercy of an almighty state authority. The prisoners, hermetically sealed off from the outside world and usually kept in strict isolation from their fellow prisoners, were subjected to months of interrogation by trained experts with the sole aim of extracting incriminating statements. Only after the non-violent revolution in autumn 1989, which ushered in the end of the SED Party dictatorship, was the State Security Service dismantled and its prisons disbanded. On October 3, 1990, when the German Democratic Republic was incorporated into the Federal Republic of Germany, the Berlin-Hohenschönhausen remand prison finally closed its gates. 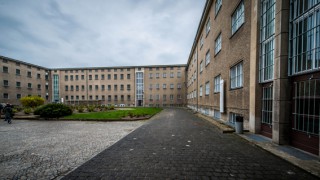 New prison building constructed at the end of 1960 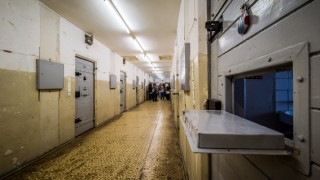 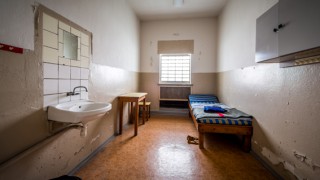 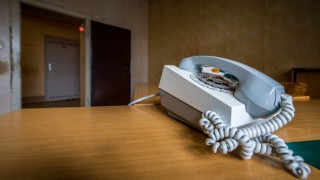 One of 120 interrogation offices in the prison
© Thomas Weber - webrock-foto.de