It would be hard to find another site in Germany so intricately linked with the 44-year history of political persecution in the Soviet Occupation Zone and the German Democratic Republic (GDR) as the Berlin-Hohenschönhausen Memorial. In June 1945, the Soviet Secret Police took over a former canteen block and food store in northeast Berlin and turned it into a detainment and transit camp under the name "Special Camp No. 3." Following the camp’s closure in November 1946, the cellar was converted into an underground cell complex, which served as the main Soviet Secret Police prison in Germany in addition to being used for detention and interrogation.

In April 1951, the East German Ministry of State Security (MfS) took over the prison, constructed an additional building, and until 1989, used the site as its main remand centre. Thousands of political prisoners passed through this jail, including nearly all the prominent figures who opposed the GDR regime. Show more

The main MfS units responsible for prisons and criminal prosecutions were conveniently located on the nearby Genslerstrasse: the Main Investigation Department (HA IX) and the Central Prison Department Headquarters (Dept. XIV), which reported directly to Erich Mielke, Minister of State Security. These two departments monitored and directed the work of all investigative departments and remand centres in the 15 districts comprising the GDR. The prison and restricted area formed a kind of headquarters of communist repression in East Germany.

The remand prison was located within a restricted military area hermetically sealed off from the outside world. This area, which never appeared on any maps of East Berlin, was home to a number of other MfS service units: the Operative Technical Sector (OTS), whose tasks included, for example, building sound-surveillance systems; Sector HA IX/11, responsible for a secret Nazi archive; and a section of the Espionage Data Processing Centre (HVA). Until 1974, the labour camp "X" was located directly next to the prison and used inmates as forced labour for the Ministry of State Security. 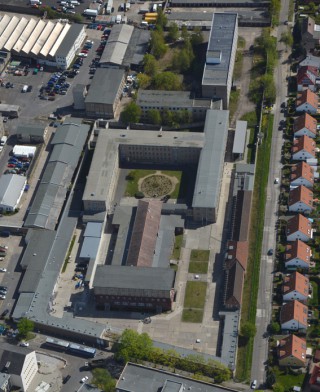 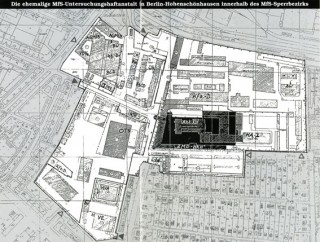 Map of the restricted Stasi district Berlin-Hohenschönhausen, in black the former Stasi prison