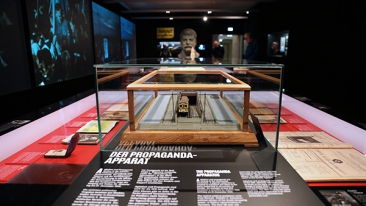 Stalin and the Germans

Open daily between 9am and 6pm

Countless mass rallies, monuments and larger-than-life portraits of Stalin had the aim to commit the East German population to the communist leadership. The exhibition illustrates the ubiquitous personality cult around the Soviet dictator in the early GDR and presents rare objects of these times.

Propaganda films from the early Fifties demonstrate the Stalin cult in a large scale. Retouched photos illustrate how the historiography had been forged. Drafts show the gigantic plans for the transformation of the architectural center of Berlin. In opposition to this the exhibition shows the massive violence during the stalinistic rule.

You may purchase the catalogue (available only in German) in the museum or via: